2015 marks the 125th year in business for Downpatrick Estate Agent's Peter Fitzpatrick & Sons. Their origins lie in the in County Down countryside near Loughinisland, where the latest incumbents still reside. Recent development and investment ensure the business is now moving with the times into the 21st Century.

1880 saw the foundations of today's business established by Peter Fitzpatrick as a small spirit grocery shop situated at the Buckshead Cross Roads near Loughinisland serving the local rural community. 10 years later in 1890 Peter expanded into auctioneering and building contracting providing additional employment for the local community. One notable building project was Aughnabrach Bridge which still supports the Loughinisland road less than half a mile from the Buckshead crossroads.

Normal practise in the late 1890s was for all land and property sales to be carried out by public auction. Notices were posted and aspiring land and property owners would gather for the special event. A solicitor had to be present to represent the vendor and a 10% deposit was required to secure the sale. Completion would be achieved one month later when the remaining sum was paid. Farm stock sales were also carried out at the same meeting, but in this instance six month's credit was the norm, provided the purchaser had a creditable guarantor named as part of the sale.

Peter Fitzpatrick continued until his son John; one of 9 children took over the reins in the 1930s. However business was disrupted by the second world war and credit auctions were a victim of the new era. Land lettings were to continue and still do to this very day in the form of Conacre Agreements with all payments due on the 1st of November. The only difference now is that guarantors have not been required from the 1970s.

Patrick Fitzpatrick was to take over in 1972 and moved the business to the local market town of Downpatrick setting up on St Patrick's Avenue. The business was to move to three different locations on the same street before finally settling in Irish Street in 1991 where it currently operates under the joint management of Peter and Ciaran, two of Paddy's children. To this day business revolves around land and property sales and lettings, continuing a tradition that ensures the name will remain affiliated as the leading Sales and Lettings Agents in County Down.

Recently refurbished offices and a new website now facilitiate the ideal location to promote your property. Check out www.peterfitzpatrick.co.uk or call in and visit the team in 18 Irish Street, Downpatrick. 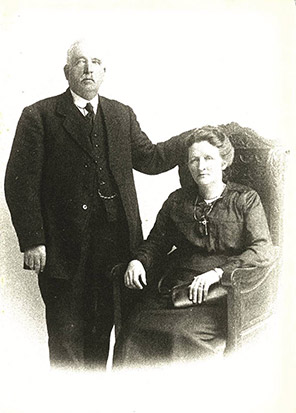